Naomi Osaka became a household name when she won back-to-back Slams at the US Open in 2018 and Australian Open in 2019, and after her 2020 US Open championship.

Known for her powerful serve and strong forehand, she is the first Asian player to hold the No.1 ranking in singles and the first Japanese player to win a Grand Slam.  She is also recognized for her voice off the court, for example, writing an Op-Ed for the New York Times on social justice issues and addressing timely topics in her off-court interviews.

Naomi is the proud daughter of a Haitian father and Japanese mother and was born in Osaka, Japan. She currently resides full-time in Los Angeles, CA.

For her strength on and off the court, Tennis Champion Naomi Osaka chosen as AP Female Athlete of the Year

During her championship battle at the U.S. Open, NAOMI OSAKA brought attention to Black victims of violence by arriving for matches wearing face masks bearing the names of Floyd, Taylor, Tamir Rice, Elijah McClain, Trayvon Martin, Ahmaud Arbery and Philando Castile. Her statement was quiet but bold, and when combined with her masterful tennis victory, an extremely powerful statement on our times. Tennis legend Billie Jean King said of Osaka: “She ignited a conversation on social justice, the results of which were bigger than tennis, larger than sports, and in doing so raised the bar for all those who want to leverage the gifts and talents we have to make a difference in our world.”  For these combined reasons and more, Osaka was chosen as AP Female Athlete of the Year, one of Sports Illustrated Unrelenting Athletes, and a Time Magazine 100 Most Influential People of the Year.  She recently wrote a New York Times Op-Ed in response to those who told her to focus on tennis instead of social justice: "We’re affected by bias and racism, just like everyone else. Why shouldn’t we say so?"

Next up for Osaka is the Tokyo Olympics, representing Japan where she was born, although she has lived in the United States since she was three. “I think I confuse people,” she says, “because some people label me, and they expect me to stick to that label. I consider myself Japanese-Haitian-American. I always grew up with a little bit more Japanese heritage and culture, but I’m Black, and I live in America, and I personally didn’t think it was too far-fetched when I started talking about things that were happening here.”

In addition to her world ranking, the next Grand Slam on her calendar and the Olympics, here are Naomi's goals for the new year: “work hard, do better, speak up, be kind.” Sounds like the goals of a true champion. 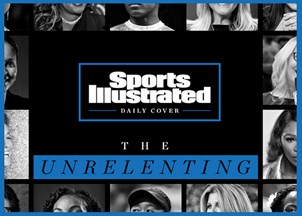 Sports Illustrated has recognized NAOMI OSAKA on their Unrelenting List of the most powerful, most influential and most outstanding women in sports right now—the game-changers who are speaking out, setting the bar and making a difference. Here is what they said of Osaka:

In the seven matches it took to win her third major title at the 2020 U.S. Open, Osaka donned seven masks, all spotlighting the names of Black victims of police brutality and racial injustice. While her three-set, comeback victory over Victoria Azarenka in the final was undeniably impressive, the 22-year-old has been resolute and relentless in using her platform to speak up in 2020. “All the people that were telling me to ‘keep politics out of sports’ (which it wasn’t political at all), really inspired me to win. You better believe I’m gonna try to be on your tv for as long as possible,” she tweeted after her win in New York.

Naomi Osaka became a household name when she won back-to-back Slams at the US Open in 2018 and Australian Open in 2019 . Known for her powerful serve and strong forehand, she is the first Asian player to hold the No.1 ranking in singles and the first Japanese player to win a Grand Slam.

Since then, she has broken more records as Forbes named her the highest paid female athlete ever in a calendar year in 2020 and SportsPro named her "The World’s Most Marketable Athlete" in 2019.

Off the court, Osaka has been pursuing various creative endeavors. Recently, she collaborated on a fashion line with the Japanese label, ADEAM, which was shown during New York Fashion Week. As part of her contract with Nike, she has been co-designing custom capsule collections that are being released in Japan.

Naomi is the proud daughter of a Haitian father and Japanese mother and was born in Osaka, Japan. She currently resides full-time in Los Angeles, CA.