Sasha Velour, a gender-fluid drag queen, was the winner of season 9 of RuPaul's Drag Race. Since winning, she has had top billing in drag shows around the world, including sold out solo appearances in New York, Los Angeles, San Francisco, London, Toronto, Vancouver, and Auckland which have been hailed as “Expressionist performance-art illustration” by The New York Times and a “spellbinding tour de force” by Forbes. Through her namesake production company, House of Velour, she has Executive Produced a TV show, a New York Fashion Week Show, a NYC World Pride float, a 300-page art book about drag, an off-off-broadway show, and an international stage tour, creating new business models for drag as art, which Fast Company says is “disrupting the business of drag.” Variety featured Velour in the “Power of New York 2019” list for her groundbreaking achievements in entertainment, and she has landed Out Magazine’s Out100 list twice. She has spoken at the Smithsonian and the Teen Vogue Summit, and reached 1.6 Million followers on Instagram in 2019. She is currently in the middle of a 62-city world tour of her sensational solo theatrical work, “Smoke & Mirrors”, and is the Executive Producer of “NightGowns”, a TV adaptation of her critically-acclaimed drag revue which will debut April 2020 on new streaming platform Quibi. 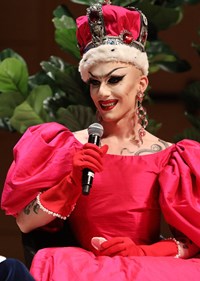 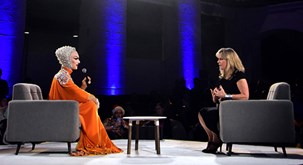 The Art of Drag (It’s Practice, Theory, and History)

Finding Success While Staying True To Oneself As A Working Artist

The Intersection Of Art and Activism

Sasha Velour is a gender-fluid drag queen and visual artist. Through multi-media performance, advocacy, and design, Velour’s work maps out new frontiers for drag and creates new spaces for LGBTQ artists to flourish and thrive.

Velour came to national attention in 2017, when she won season 9 of the Emmy-winning reality TV competition RuPaul's Drag Race, which was nominated for an additional 8 Emmys that same year. Her finale lip-sync to “So Emotional” by Whitney Houston was called “the performance of the year” by the AV Club and named one of “TV’s Best Musical Moments on Television” by Entertainment Weekly, and contributed to an increase in streaming plays of the song by 500% that summer.

Her live performances have been called “an entirely new level of performance art” (Yahoo) and “heart-wrenching” (Billboard). She has pioneered the use of projection mapping in lip-synch drag performances, and is known for combining emotional pathos with theatrical stunts. Her first solo show, Sasha Velour: Smoke and Mirrors, begans its 2019 tour in January in Australia and New Zealand.

Velour invested her Drag Race prize money back into “Nightgowns,” the monthly drag show she had been producing since 2015 in Brooklyn. Serving as its host, director, and in-house lighting designer, Velour has turned Nightgowns into one of the most esteemed live drag shows in the world, dubbed “[the] thinking queens drag show” by Time Out NY and “eclectic, wild and highly personal” by Billboard Magazine. Nightgowns has been produced in New York, London, and Los Angeles. The monthly appearance at National Sawdust in Brooklyn continues to sell out within minutes, exposing thousands of fans to forms of drag not seen on TV.

In September 2018, Velour collaborated with Opening Ceremony to produce, direct, and host their Fall Fashion showing, better known as “The Gift of Showz," a piece of drag theater inspired by Nightgowns, in which Christina Aguilera appeared as the special guest star. TIME raved that it "won't soon be forgotten,” and the New York Times called it “the brand’s…most radical [presentation] yet…a celebration of personality, camp and performance.”

Velour has been profiled in Vogue, Vogue Italia, Plastik, Elle, NPR, and Rolling Stone. She was the face of the Winter 2018 Swatch campaign.

Velour’s studio and illustration work has been the subject of 2 solo gallery shows in New York (2014 and 2016). In 2017, she drew the Google Doodle of Marlene Dietrich. She is the creative director (and graphic designer) of the art magazine “Velour” (now released in hardcover Collector’s Edition), which celebrates the art of drag through visual art, poetry, photography, and essay.

Velour frequently uses her platform to discuss politics, queer history, and LGBTQ+ issues. She was billed as a keynote speaker at the 2018 Teen Vogue Summit in New York City. In December 2018, she took the stage at The Smithsonian for “The Long Conversation,” an event with thought leaders from around the world.

Velour is the only child of Mark D. Steinberg, a professor of Russian History at University of Illinois (aka “Papa Velour”) and Jane T. Hedges, an editor, who died of cancer in 2015. She currently lives in Brooklyn, New York with her partner Johnny and their Italian Greyhound Vanya.