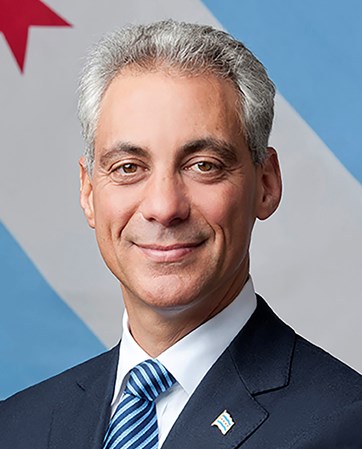 Starting out his political career as a senior advisor to President Bill Clinton, Emanuel went on to serve three terms in Congress, and as White House Chief of Staff to President Obama, giving him the unique ability to approach issues from a city, state and federal perspective. He shares prescient analysis on our future political landscape, as well as candid lessons on personal and professional success.

With over four decades of experience in the political arena, Karl Rove is an iconic strategist whose provocative and robust knowledge of the major issues of the day have made him one of the most sought-after commentators of our time.

Rove has been described by respected author and columnist Michael Barone as “unique…no Presidential appointee has ever had such a strong influence on politics and policy, and none is likely to do so again anytime soon” and by Fred Barnes, Executive Editor of the Weekly Standard as “the greatest political mind of his generation and probably of any generation… He knows history, understands the moods of the public, and is a visionary on matters of public policy.”

From major international conferences to college campuses and more intimate corporate events, Karl Rove's shrewd and unparalleled analysis make him resonate with all audiences. Sponsors hosting Rove have reported that his remarks "were extremely insightful and very helpful to our industry leaders" (Edison Electric Institute); "stimulating and valuable" (The Fraser Institute); and "provocative, lively and thoughtful" (Nomura); with audiences "often erupting in applause" (Wabash College) and his presentations consistently praised as "one of the highest-rated" (The TriZetto Group).

Please send me availability & fees for Rahm Emanuel & Karl Rove
Thank you for your interest in this Harry Walker Agency speaker.
You will hear from one of our agents in the next 24 hours. If you have any other questions or information, please call us right away at 646.227.4900. Are you also interested in learning more about other speakers? Create a My Speaker List.
Learn more about Rahm Emanuel & Karl Rove
Biography

Rahm Emanuel was 55th mayor of the City of Chicago.

Previously, Mayor Emanuel served as White House Chief of Staff for President Barack Obama, three terms in the U.S. House of Representatives representing Illinois’ 5th District, and was a key member of the Clinton White House.

He is married to Amy Rule, and they have three children.

Karl Rove, an iconic political strategist and one of the most sought-after political pundits of our time, is best known for his provocative and robust knowledge of the major political issues of the day.

Rove has been described by respected author and columnist Michael Barone in U.S. News & World Report as “…unique…no Presidential appointee has ever had such a strong influence on politics and policy, and none is likely to do so again anytime soon.” Washington Post columnist David Broder has called Rove a master political strategist whose “game has always been long term…and he plays it with an intensity and attention to detail that few can match.” Fred Barnes, executive editor of The Weekly Standard, has called him “the greatest political mind of his generation and probably of any generation… He knows history, understands the moods of the public, and is a visionary on matters of public policy.”

Mr. Rove writes a weekly op-ed for the Wall Street Journal, appears frequently on the Fox News Channel, and is the author of the New York Times best seller, Courage and Consequence.  His latest book is The Triumph of William McKinley: Why the Election of 1896 Still Matters.