Philippe Reines is one of Secretary Hillary Rodham Clinton's longest serving communications advisors. He has worked with Secretary Clinton in the State Department, on her first presidential campaign, and in the U.S. Senate. Reines stood beside Secretary Clinton during some of the most important national security and policy decisions of the last decade and a half, and is an expert in strategic communications and public relations. Reines also serves as a Founder and Managing Director of Beacon Global Strategies LLC, a strategic advisory firm specializing in International Policy, Defense, Cyber, Intelligence and Homeland Security. Please send me availability & fees for Philippe Reines
Thank you for your interest in this Harry Walker Agency speaker.
You will hear from one of our agents in the next 24 hours. If you have any other questions or information, please call us right away at 646.227.4900. Are you also interested in learning more about other speakers? Create a My Speaker List.
The 2016 Presidential Campaign | The Washington Center [full+qa 53:17] - Get Sharable Link
https://www.harrywalker.com/speakers/philippe-reines?videoid=28761
The 2016 Presidential Campaign | The Washington Center [full+qa 53:17]

Play
Now
Getting millennials to vote | The Washington Center [clip 4:28]

The Front Lines of Our Modern History

Philippe Reines has worked with Hillary Rodham Clinton on the most important policy issues facing the Senate, the State Department and on the presidential campaign trail.  The dawn of the new century called for bold new decisions in the face of bold new threats to our domestic and international secu ...

Philippe Reines has worked with Hillary Rodham Clinton on the most important policy issues facing the Senate, the State Department and on the presidential campaign trail.  The dawn of the new century called for bold new decisions in the face of bold new threats to our domestic and international security.  Philippe Reines is one of Secretary Clinton's longest advisors, and he stood beside her during these critical moments in our national security.

As one of Secretary Hillary Rodham Clinton's longest serving communications advisors, Philippe Reines is an expert in strategic communication at a global level.  In his current role at Beacon Global Strategies, he advises politicians, governments, NGO's and businesses on the highest level on their c ...

As one of Secretary Hillary Rodham Clinton's longest serving communications advisors, Philippe Reines is an expert in strategic communication at a global level.  In his current role at Beacon Global Strategies, he advises politicians, governments, NGO's and businesses on the highest level on their communications and public relations strategies.  He relates the to audience essential elements of an effective strategy and shares personal accounts of the strategy in action. 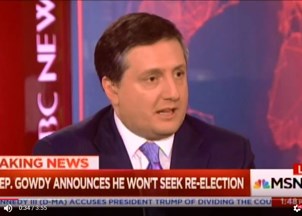 Philippe Reines in the News 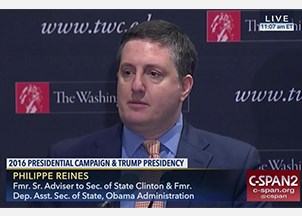 Senior Advisor to Secretary Hillary Rodham Clinton since 2002 and Founder of strategic advisory firm Beacon Global Strategies, PHILLIPPE REINES is in demand for his shrewd insights into today’s political landscape. Recently sought-out by The Washington Center for his insider perspective on dynamics in Washington, Reines offered sharp commentary on the current administration, the 2018 midterm elections and the 2020 presidential campaign landscape.  An expert in strategic communication at the global level, Reines is able to translate his insights into actionable action plans and effective strategies for organizations and businesses across industries. Heralded for decoding what an effective communications and public relations strategy looks like even against a tense political backdrop, Reines also shares first-hand accounts of crisis-management and high-level decision-making in action. As Hillary Clinton said of Reines: “I have relied on Philippe’s judgment, intelligence and wit for nearly a decade… As an author, Senator, candidate and as Secretary of State, I have come to trust his instincts and value his skill as a communicator and counselor. Wherever we go — from Buffalo to Beijing — one thing remains constant: Philippe always has my back.” 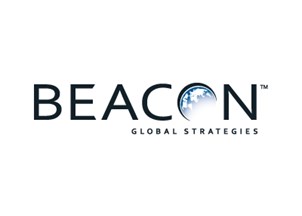 Philippe Reines is a founder of Beacon Global Strategies

BGS is a strategic advisory firm specializing in international policy, defense and security.

Trump is a freak of political nature. Here’s how you can beat him. - The Washington Post
91 Minutes With Philippe Reines - New Yorker
Biography

Prior to joining the State Department with the Secretary, he served from 2002-2009 as Senator Clinton’s Senior Advisor & Press Secretary. In 2007-2008, Mr. Reines simultaneously served on Hillary Clinton’s presidential campaign as Communications Advisor for National Security & Foreign Policy, and served as Chelsea Clinton’s spokesman, traveling with her throughout the primaries, often with the candidate and Former President Bill Clinton.

In the Senate, he was the primary point of contact between Clinton’s office and the national press corps, and served as her spokesman and primary communications advisor on national security and foreign policy issues, largely focusing on Clinton’s work on the Senate Armed Services Committee.

Previously, Mr. Reines served in the House of Representatives as Communications Director for Representative Jane Harman, where he successfully helped the Congresswoman raise her profile as a senior member of the House Permanent Select Committee on Intelligence and Ranking Member of the Subcommittee on Terrorism & Homeland Security.

Prior to his work on Capitol Hill, Mr. Reines was a member of the 2000 Gore/Lieberman presidential campaign’s rapid response team. After Election Day, he served on the communications team of the Gore/Lieberman Recount Committee during the post-election litigation in Florida.

Mr. Reines remained involved in former Vice President Gore’s public activities after Gore left office in 2001, serving as his Teaching & Research Assistant for his “Covering National Affairs” course at the Columbia School of Journalism in the Spring of 2001. In 2004, Mr. Reines taught a course at New York University’s Marketing and Management Institute entitled, “Public Relations Strategies for Politicians.”

Mr. Reines is a recipient of the Department of State’s Distinguished Honor Award.

Prior to pursuing his long-standing passion for politics and public service, Mr. Reines worked in banking and finance for several New York City banks.