Opal Tometi is one of the most influential human rights leaders of our time. As one of the three women co-founders of the Black Lives Matter movement, digital platform, and chapter-based network, her name is etched in American history. Hailed as a feminist freedom fighter, Opal is respected for her track record of uniting communities, and is known for her thought leadership on race, immigration, and gender. In early 2019 she completed nearly a decade of service as the Executive Director of the Black Alliance for Just Immigration (BAJI), the first immigrant rights organization for people of African descent in the United States. Opal is also a trusted advisor to many formations, including Atlantic Fellows for Racial Equity and the Andrew Goodman Foundation. She has received numerous recognitions including an honorary PhD, and was named among the 50 Most Influential People by Forbes, Marie Claire and Cosmopolitan magazines. Opal was also honored by the City University of New York (CUNY) with a scholarship in her name to support immigrant students pursuing law degrees. Her most recent recognition includes winning the 2019 Coretta Scott King Center Award and Douglass 200 Award, and being featured in a video installation at the Smithsonian’s National Museum for African History and Culture for her contributions in thought-leadership for the betterment of the diaspora. As the daughter of Nigerian immigrants, Opal has set her movement sights on an even bigger struggle: uplifting the global Black community. In 2020 she founded Diaspora Rising, a digital digest focused on pertinent issues of blackness around the world. When she’s not traveling the world or strategizing for social justice you can catch her dancing, riding a bike or adding to her Black art collection. And while she’s accomplished a lot to date, the truth is, Opal has only just begun. 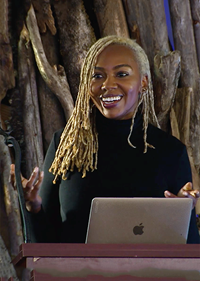 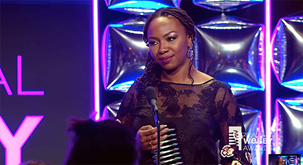 Play
Now
In Conversation - Leadership, Hope, and Inspiration in the face of Painful Realities | TED [16:05]

Virtual Programming: For more than 20 years, Opal Tometi has been a globally recognized human rights advocate, strategist, and writer, best known for her role as a co-founder of the Black Lives Matter movement

For more than 20 years, OPAL TOMETI has been a globally recognized human rights advocate, strategist, and writer, best known for her role as a co-founder of the Black Lives Matter movement. Widely respected as a millennial trailblazer and immigration policy expert, Tometi has been lauded for her creativity and bold leadership. In addition to her work with #BlackLivesMatter, Opal serves as the Executive Director of the Black Alliance for Just Immigration (BAJI), the first national immigrant rights organization that advances migrant rights and racial justice for people of African descent. Currently, she’s being featured in the National Museum for African American History and Culture (NMAAHC), and was a recipient of the Vh1 Everyday Trailblazer honor and Frederick Douglass 200 Awardee for her groundbreaking contributions to contemporary social movements and In 2019, Tometi, Garza, and Cullors (the founders of the Black Lives Matter movement) received a PEN Oakland Josephine Miles Literary Award for When They Call You a Terrorist: A Black Lives Matter Memoir.

With appearances on CNN, MSNBC, BET; featured in The New York Times, Washington Post, TIME, InStyle, Seventeen, Huffington Post, and nearly every other major publication; and named “A New Civil Rights Leader” by CNN and the Los Angeles Times, Tometi’s lifetime of work and commitment to social change has become a staple in the modern movement for justice, equity, diversity, and inclusion. Tometi was honored as one of the Women of the Year Award by Glamour Magazine, recipient of the BETs Change Agent Award, and considered to be among the world’s fifty greatest leaders by Fortune, POLITICO, and Marie Claire Magazines. From college and universities to boardrooms and trade associations, groups committed to advancing justice and equity in the workplace and world love Tometi. She can bring the substantive work of a researcher combined with the professional and personal experience of a black woman in America committed to creating a world that works for everyone.

Heralded as a feminist freedom-fighter in the U.S. and now a global icon, Opal Tometi is one of the most influential human rights leaders of our time. As one of the three women co-founders of the Black Lives Matter movement, her name is etched in American history. For years, the award-winning advocate, strategist and writer has used her voice to ensure that race, immigration, and gender justice remain at the forefront of global conversations.

Opal’s story of heart, passion, and justice starts in her childhood. The daughter of Nigerian immigrants, Tometi experienced first hand the challenges that her tight knit Black immigrant community faced while growing up in Arizona. She witnessed the heartbreaking human rights crisis at the US-Mexico border and as a result became an outspoken community organizer. Young Opal launched initiatives to tackle homelessness in Phoenix. In school she led student advocacy and council groups, showcased her Blackness on a competitive step team, and argued passionately on a debate team. As she got older, and as her eyes were opened to the realities of the human condition, Opal’s voice grew stronger and louder.

Before BLM, Opal spent eight years as Executive Director at the Black Alliance for Just Immigration (BAJI), an organization that helps black immigrant communities mobilize and advocate for social and economic justice. Assuming her role as the first woman director at age 27, Opal worked on the reunification of families in the wake of the Haitian earthquake in 2010, and boldly challenged unjust deportations. She went on to speak on behalf of immigrants to the United Nations, at congressional briefings, at the Atlantic Ideas Summit, Harvard and Yale Universities, on the TED stage, and over 100 more stages around the globe.

In the wake of the devastating acquittal of Trayvon Martin’s killer, Tometi initiated the Black Lives Matter online infrastructure in 2013, ensuring that millions of people could participate in a movement for inclusive democracy. Now, 7 years later, with the momentum BLM has gained in the wake of the murder of George Floyd, with a COVID-19 Pandemic, and as people all over the world reconcile their social consciousness with the reality of our present suffering, Opal has set her movement sights on an even bigger struggle: unifying the global Black community.

This is why she saw the need for a platform like Diaspora Rising. The digital digest focuses on pertinent issues of blackness around the world. Ahead of the first edition, Opal launched an inspiring video, shot in Ghana by filmmaker Wael Gzoly, that solidified her new call-to-action. She stands confidently in front of Ghanaian monuments and landmarks reminding us that our ancestors also fought these freedom battles, and won.

Opal is a trusted advisor and board member to many organizations and initiatives and often travels internationally to support human rights initiatives. And while her career has been impressive, so too are her accolades, including being named one of TIME 100’s Most influential Women of The Century. She is currently featured in the Smithsonian’s National Museum for African History and Culture (NMAAHC) for her contributions. Along with her fellow BLM Co-founders, Opal was awarded the Sydney Peace Prize, and an Honorary PhD. Over the years she has graced the cover of several magazines, and has been named to “Most Influential People” lists by Forbes, Marie Claire and Cosmopolitan magazines. Her most recent award was the 2020 Freedom of the Flame Award from civil rights icons, awarded during the 55th anniversary of the Selma Bridge Crossing.

Opal represents a level of courage and leadership that most of us only read about in Black history books. Faith and family are her pillars of strength through the heartache of witnessing and fighting for justice, but she also draws from her African heritage, her identity as a Nigerian woman, and a wealth of education and experience in the field of human rights. Opal holds a Masters of Arts degree in Communication Studies and uses her skills as a social entrepreneur in the private and public sector to advance social justice.

When she’s not traveling the world or strategizing for social justice you can catch her dancing, riding a bike or adding to her African art collection. And while she’s accomplished a lot to date, the truth is, Opal has only just begun.