Ambassador R. Nicholas Burns is one of the country’s most articulate spokespeople on globalization and U.S. foreign policy, earning respect as a nonpartisan expert on public diplomacy and world affairs. Over the course of his illustrious, 27-year career, he played a leadership role in U.S. foreign policy toward the Middle East and Asia and was the nation’s top career diplomat as under secretary of state for political affairs from 2005–2008. He served three presidents: George H.W. Bush, Bill Clinton, and George W. Bush. Burns speaks with candor and passion about his position at the forefront of American foreign relations and policy and offers a big-picture perspective of our country’s position on the world stage.

Please send me availability & fees for Nicholas Burns
Thank you for your interest in this Harry Walker Agency speaker.
You will hear from one of our agents in the next 24 hours. If you have any other questions or information, please call us right away at 646.227.4900. Are you also interested in learning more about other speakers? Create a My Speaker List.
Rave Reviews About Nicholas Burns
“
Nick Burns is great! He is a great guy, a great speaker, he has great insights, and he is a pleasure to work with. Our ALDA Chair introduced Professor Burns and when I introduced them to each other before the session, our Chair asked Nick whether this is a truly unusual time or if we have faced challenges of this nature in the past. Nick’s response was “yes we have” and he pointed to the Revolutionary War when the US defeated the superpower and won our independence, the debate over slavery which led to the American Civil War and 16 million casualties, and WW1 and the ensuing Great Depression which led to WW2 and 60 million casualties. I am always impressed when speakers can speak substantively and articulately for 60 minutes without prepared remarks and overheads, although Nick displayed 3-4 maps when talking about the future challenges in each region. All in all, we were very pleased with Nick’s presentation. He was a great addition to our meeting.

Play
Now
In Conversation: The State of the State Department and American Diplomacy | [1:07:09]

Ambassador Burns provides unparalleled expertise in his presentations on topics ranging from NATO and the EU  to how India and China’s rise to power affects the global economy. He believes that America’s prosperity and security depend on taking into account the world’s concerns; delivering a positiv ...

Ambassador Burns provides unparalleled expertise in his presentations on topics ranging from NATO and the EU  to how India and China’s rise to power affects the global economy. He believes that America’s prosperity and security depend on taking into account the world’s concerns; delivering a positive, hopeful image; participating constructively in international organizations (with an emphasis on multilateralism); and becoming a more energized, enlightened, and effective global leader. 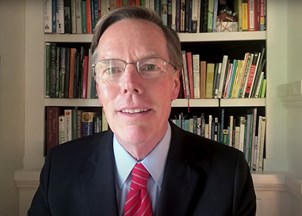 NICHOLAS BURNS is one of the country’s most renowned, articulate, and nonpartisan spokespeople on globalization, U.S. foreign policy, and public diplomacy.  He delivered the Commencement Address virtually to George Washington University’s Elliott School of International Affairs. Quoting His Holiness Pope Francis he counseled the Class of 2020 that we are all “on the same boat now,” and urged them to work together across national, ideological, religious and cultural boundaries to overcome our challenges.  Arguing against “narrow nationalism” he asked them to remember what made us a great global power after the Second World War—our faith in our allies, our defense of democracy and our openness to immigrants and refugees,” and to embrace global leadership.

NICHOLAS BURNS is one of the country’s most renowned, articulate, and nonpartisan spokespeople on globalization, U.S. foreign policy, and public diplomacy.  Stay informed of his latest thoughts and insights penned for various publications and other informed discourse throughout the news media landscape.

Burns is Director of the Aspen Strategy Group, Senior Counselor at the Cohen Group, and serves on the Board of Directors of Entegris, Inc. He also serves on the boards of several non-profit organizations, including the Council on Foreign Relations, Special Olympics International, the Diplomacy Center Foundation, the Center for the Study of the Presidency and Congress, The Trilateral Commission, the Richard Lounsbery Foundation, the Atlantic Council, America Abroad Media, the Association of Diplomatic Studies and Training, the American School of Classical Studies in Athens, the Appeal of Conscience Foundation, the Boston Committee on Foreign Relations, and the Gennadius Library. From 2014-2017, he was a member of Secretary of State John Kerry’s Foreign Affairs Policy Board at the U.S. Department of State. He is Vice Chairman of the American Ditchley Foundation and serves on the Panel of Senior Advisors at Chatham House: the Royal Institute of International Affairs.  He is a member of the Committee on Conscience of the United States Holocaust Memorial Museum. He is also a member of the American Academy of Arts and Sciences, the Order of Saint John and Red Sox Nation.

Professor Burns served in the United States government for twenty-seven years.  As a career Foreign Service Officer, he was Under Secretary of State for Political Affairs from 2005 to 2008; the State Department’s third-ranking official when he led negotiations on the U.S.–India Civil Nuclear Agreement; a long-term military assistance agreement with Israel; and was the lead U.S. negotiator on Iran’s nuclear program. He was U.S. Ambassador to NATO (2001–2005), Ambassador to Greece (1997–2001) and State Department Spokesman (1995–1997).  He worked for five years (1990–1995) on the National Security Council at the White House where he was Senior Director for Russia, Ukraine and Eurasia Affairs and Special Assistant to President Clinton and Director for Soviet Affairs in the Administration of President George H.W. Bush. Burns also served in the American Consulate General in Jerusalem (1985–1987) where he coordinated U.S. economic assistance to the Palestinian people in the West Bank and before that, at the American embassies in Egypt (1983-1985) and Mauritania (1980 as an intern).

Professor Burns has received twelve honorary degrees, the Presidential Distinguished Service Award, the Secretary of State’s Distinguished Service Award, the Woodrow Wilson Award for Public Service from the Johns Hopkins University, the Boston College Alumni Achievement Award, and the Jean Mayer Global Citizenship Award from Tufts University. He has a BA in History from Boston College (1978), an MA in International Relations from the Johns Hopkins School of Advanced International Studies (1980), and earned the Certificat Pratique de Langue Francaise at the University of Paris-Sorbonne (1977). He was a visiting Scholar at the Woodrow Wilson Center for International Scholars in summer 2008.