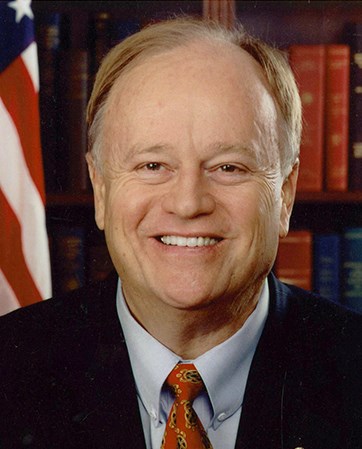 Please send me availability & fees for Max Cleland
Thank you for your interest in this Harry Walker Agency speaker.
You will hear from one of our agents in the next 24 hours. If you have any other questions or information, please call us right away at 646.227.4900. Are you also interested in learning more about other speakers? Create a My Speaker List.
Rave Reviews About Max Cleland
“
It was a spectacular weekend! ... Max [Cleland] is a truly wonderful person. The event was a huge success and we got a ton of press coverage. Thanks for everything

The world breaks everyone and afterward many are strong at the broken places. Those words, written by Ernest Hemingway, have been the source of inspiration for Max Cleland and aptly describe him and his philosophy. All of us DO encounter setbacks and tough challenges – and there are moments wh ...

"The world breaks everyone and afterward many are strong at the broken places." Those words, written by Ernest Hemingway, have been the source of inspiration for Max Cleland and aptly describe him and his philosophy. All of us DO encounter setbacks and tough challenges – and there are moments when all of us feel uncertain about our ability to rise above them. Given the times we live in, all of us can use an inspiring reminder that, as people, we are stronger and more resilient than we give ourselves credit for – capable of dealing with anything – and then getting stronger in those broken places to be even stronger when the next challenge comes along. Cleland has a gift for delivering that powerful message and restoring confidence in our inner strength. Having lost both legs and an arm in a Vietnam grenade accident, Cleland fought against pain, depression, and rejection to overcome staggering odds and get stronger in his own broken places. The story of his ongoing journey to create a life that makes a difference is an inspiration to audiences who draw on his courage and strength to rediscover their own.

Going for the MAX in Life: Living Life to the Fullest

Campaigns, Congress and the Presidency: Behind the Headlines

Max Cleland has one of the most storied political careers in modern times. Severely wounded in battle in Vietnam, he recovered to become head of the Veterans Administration and later won election to the U.S. Senate. He is a man who's held high political office but who has never lost the common touch ...

Max Cleland has one of the most storied political careers in modern times. Severely wounded in battle in Vietnam, he recovered to become head of the Veterans Administration and later won election to the U.S. Senate. He is a man who's held high political office but who has never lost the common touch. Former Senator Cleland discusses what the Democratic majority in Congress means and how those political headlines affect you. He forecass what the long-term ramifications are for you, your family, your organization and the bottom line.

A former United States Senator and yongest-evver Adminstrator of the U.S. Veterans Administration, Max Cleland has been a distinguished public servant for nearly 50 years.

Born and raised in Lithonia, Georgia, Cleland received the Atlanta Journal Cup as the most outstanding graduate in the class of 1960 at Lithonia High School.  He later attended the Washington Semester Program at American University where he was inspired to enter public service.  In 1964 he earned his B.A. degree from Stetson University and received a Second lieutenant's Commission in the U.S. Army through its ROTC program.  Cleland holds a Masters Degree in American history from Emory University. Both Stetson and Emory have awarded him honorary doctorate degrees.

In 1967, Cleland volunteered for service in the Vietnam War and was promoted to Army Captain.  Seriously wounded in combat in 1968, he was awarded both the Bronze Star for meritorious service and the Silver Star for gallantry in action.

In 1970, Cleland was elected to the Georgia Senate where he was the youngest member of that body and the only Vietnam veteran.  He was re-elected to the State Senate in 1972.  There he authored and helped to enact into law legislation which for the first time made public facilities in Georgia accessible to the elderly and handicapped.

In 1974, Cleland lost his race for Lieutenant Governor of Georgia.  The following year he was appointed to the staff of the U.S. Senate Veterans Affairs Committee where he investigated hospitals in the Veterans Adminsitrationn health care system and their treatment of wounded U.S. troops returning from Vietnam.

Appointed in 1977 by President Jimmy Carter to head the Veterans Administration, Cleland managed the largest health care system in the country.  As the nations's youngest VA Administrator ever and the first Vietnam veteran to head the department, Cleland created the Vet Center counseling program.  Today over 300 Vet Centers across America help veterans and their families deal with post-traumatic stress disorders and associated problems.

The Institute for Public Service, in 1977, awarded Cleland the Thomas Jefferson Award, which is given to an American under the age of 35 who makes the greatest contribution to public service.  The following year Cleland received the Neal Pike Prize from Boston University for his outstanding contributions to the rehabilitation of disabled veterans.

In 1982, Cleland won election as Georgia's youngest Secretary of State and served in that office for 12 years. In 996, he was elected to succeed Sam Nunn in the United States Senate. Cleland held the seat on the Senate Armed Services Committee which was previously occupied by Nunn and Senator Richard Russell.

As a member of the Armed Services Committee, Cleland was a forceful advocate for veterans and for a strong national defense.  He successfully fought to improve some of the Department of Defense's most pressing personnel needs, includeing recruiting and retention, pay and compensation reform of the military retirement system and health care.  Because of Max Cleland's efforts, servicemen and women who choose not to use their GI bill educational benefits can now pass those benefits on to their children.  In 2000, Cleland was selected by the REserve Officers Association to receive the group's Minute Man of the Year Award, which is presented annually to "the citizen who has contributed most to National Security during these times."

After his defeat for re-election in 2002, Cleland was appointed to the 9-11 Commission to study the circumstances surrounding the September 11, 2001 terrorist attacks and to recommend safeguards against future attacks.  While a member of the Commission, Cleland served as an adjunct professor in Political Science on the Washington Semester Program at American University.  In late 2003, he was appointed to be a member of the Board of Directors for the Export Import Bank of the United STates, where he served for three and a half years.

Cleland is the author of three books: Strong at the Broken Places; Going for the Max: 12 Principles for Living Life to the Fullest; and Heart of a Patriot.