Brothers (and veteran TV journalists) Bernard and Marvin Kalb spent their journalism careers covering many of the most significant events in mid-20th century American history, including the Cuban missile crisis, the Vietnam War and President Nixon’s visit to China. They have teamed up to take on the various challenges now facing America and share their views based on decades of foreign policy experience around the world. 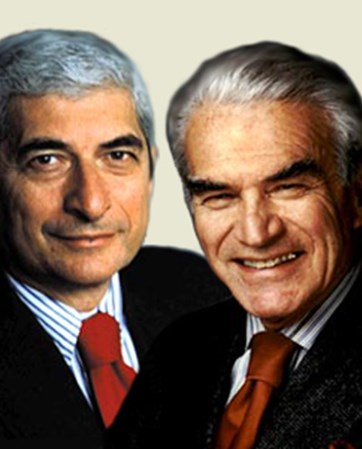 Please send me availability & fees for Marvin & Bernard Kalb
Thank you for your interest in this Harry Walker Agency speaker.
You will hear from one of our agents in the next 24 hours. If you have any other questions or information, please call us right away at 646.227.4900. Are you also interested in learning more about other speakers? Create a My Speaker List.
Explore Talks By Marvin & Bernard Kalb
Expand all >

An Evening with the Brothers K

Veteran TV journalists Marvin Kalb and Bernard Kalb, teaming up, take on the various challenges facing America and share their views based on decades of foreign policy experience around the world. Over the years they have traveled with Presidents and Secretaries of State and in the process have acquired on-the-spot insight into the many problems confronting the country. They have flown on the diplomatic shuttle between Israel and Arab countries, talked with both Israeli and Palestinian leaders. Their analyses are filled with personal vignettes of presidents, prime ministers, dictators and tyrants they have covered in a lifetime of journalism. But beyond analyzing the many threats to America, they take on the challenge of the media— and the responsibilities of the press at a time when so much of cable has turned analysis into a shouting match, giving us vaudeville disguised as wisdom.

Even one at a time the Kalbs are great. Together, the Brothers K offer a double-whammy, guaranteeing an evening of diplomatic savvyness, journalistic excitement and an endless supply of personal stories of what it’s like to have a ringside seat at the great events of our times.

For years Marvin was chief diplomatic correspondent for CBS and later NBC News, topping an awardwinning career as moderator of NBC’s Meet the Press, before joining Harvard’s JFK School as director of the Shorenstein Center on the Press, Politics and Public Policy. He has authored a dozen books.

Bernard was for many years a foreign correspondent, based in Southeast Asia, for The New York Times and CBS News; he also served as Assistant Secretary of State for Public Affairs and spokesman for the State Department under George Shultz. His resignation to protest government “disinformation” made frontpage headlines. For a decade, he was media critic on CNN’s weekly program Reliable Sources.

Together, they have written two books: a bio of Henry Kissinger, a full selection of the Book of the Month Club, and The Last Ambassador, about the collapse of Saigon in 1975.