Baldoni created the dinner conversation series, Man Enough, which dives into the traditional and modern definitions of masculinity and fatherhood while focusing on topics like body image, relationships, and fatherhood- all of which Baldoni open shared about in his viral TED talk.

Baldoni has made an impact on audiences by lovingly and sincerely portraying courageous, multi-dimensional people with disabilities and illnesses, including his successful and award-winning projects Clouds; People's Choice Award-nominee Five Feet Apart; and My Last Days, an uplifting multi-season documentary series about life as told by courageous people living with terminal illnesses. That show was recognized by the Television Academy Honors as one of the most powerful and impactful television shows that inspired widespread social change.

Baldoni first rose to worldwide fame through his role as “Rafael” on The CW’s award-winning phenomenon Jane the Virgin. 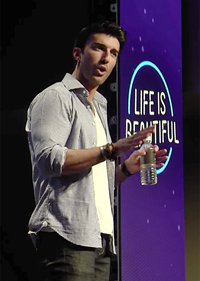 Virtual Programming: Actor and Filmmaker-with-a-mission Justin Baldoni's new film Clouds tells the inspiring true-life story of a teen with cancer, and inspires us to live fully every day

In his new film Clouds, JUSTIN BALDONI, director of the acclaimed and deeply touching Five Feet Apart and My Last Days, tells the inspiring true story of teen Zach Sobiech's battle with cancer and his message to live for today.  Clouds streams on Disney+ in October and promises to have the same honest, multi-dimensional and empathetic portrayal of a courageous person, and those who love him, coming to terms with a terminal illness.

Clouds is the latest creation from Baldoni's purpose-driven media company Wayfarer Entertainment, whose mission is to create productions that elevate and speak to the human spirit.  He addresses important experiences and emotions in raw and honest ways, sometimes turning the lens on himself, as he did in his viral TED Talk which explored new definitions of marriage, fatherhood and manhood free from toxic traditional limitations of what masculinity could be.

A virtual event with Justin Baldoni brings your audience together to remember, celebrate and inspire. He is a fan favorite of all ages - he starred as Rafael the beloved hit show Jane the Virgin -  and is a person your audience wants to spend time with.  He inspires us to uplift our conversations and our media consumption to that which makes us see, feel and connect with more understanding and empathy. 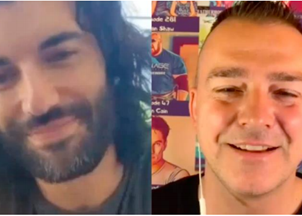 JUSTIN BALDONI is a First Class Father, Actor, Director and filmmaker. As an entrepreneur, Baldoni co-founded Wayfarer Entertainment—a cause-driven media studio focused on creating content that highlights inspiration, unity, and the power of human connection. In addition to developing projects from ideation through release, Baldoni created the dinner conversation series, Man Enough, which dives into traditional masculinity while focusing on topics like body image, relationships, and fatherhood. He has spoken about his own journey with masculinity in a viral TED Talk. In this YouTube podcast, Justin shares his Fatherhood journey, he discusses the problem with the way dads are portrayed on TV and in Movies and how he is working to change it, he describes the importance of marriage and how old stereotypes about marriage need to change as well, talks about some upcoming projects, and more.

Justin Baldoni is an actor, director, producer, entrepreneur, and changemaker whose efforts are focused on creating impactful media and entertainment. Baldoni is the co-founder of Wayfarer Studios, an independent financial and production engine pioneering purpose-driven, multiplatform film and television productions that elevate and speak to the human spirit. He is also the founder of Wayfarer Entertainment, a social impact production company, and founder of Wayfarer Foundation, a non-profit which seeks to change the way communities see and respond to unhoused populations.

In 2019, Baldoni co-founded Wayfarer Studios with business leader, humanitarian and film producer Steve Sarowitz, disrupting the typical studio model by producing stories that serve as true agents for social change. Baldoni directed and produced Wayfarer Studios’ first featurefilm project, Clouds, which is based on the book Fly a Little Higher by Laura Sobiech about her son Zach. The film was acquired by Disney+, becoming Disney’s first-ever narrative acquisition on its global platform. In addition to Clouds, Wayfarer Studios has already built out a robust, genre-defying slate with innovative projects spanning film, scripted television, documentaries, digital platforms and more.

Baldoni made his feature-film directorial debut in March 2019 with Five Feet Apart for CBS Films and Lionsgate, starring Cole Sprouse and Haley Lu Richardson as Cystic Fibrosis patients who fall in love but aren’t allowed physical contact due to their medical condition. The film went on to gross $91 million worldwide, making it CBS Films’ third highest grossing film of all time, and was nominated for several awards including a People’s Choice Award nomination for “Drama Movie of 2019” and a Teen Choice Award nomination for “Choice Drama Movie.”

As a director, Baldoni is known to leave a lasting impression on his audience. In 2012, he created and directed The CW’s My Last Days, an uplifting documentary series about life as told by courageous people living with terminal illnesses. The series is currently in its fifth season on The CW and was recognized by the Television Academy Honors as one of the most powerful and impactful television shows of 2018 that inspired widespread social change.

Baldoni co-founded Wayfarer Entertainment in 2013—a social impact production company specializing in inspirational digital and branded content with a mission to create projects that benefit the world. Through this platform, he created the dinner conversation series, Man Enough, which dives into traditional masculinity while focusing on topics like body image, relationships, and fatherhood. He has spoken about his own journey with masculinity in a viral TED Talk as well as across college campuses in America.

Baldoni is also founder and chairman of The Wayfarer Foundation, a non-profit organization dedicated to transforming the way communities see and respond to the needs of people experiencing homelessness. Each year, The Wayfarer Foundation puts on one of Los Angeles’ largest volunteer events, the Skid Row Carnival of Love, which provides connection, services, and resources to people who are experiencing homelessness in LA’s Skid Row community. Over the past few years, over 6,000 volunteers have served over 15,000 guests, providing them access to over 100 service partners.

Baldoni first rose to worldwide fame through his role as “Rafael” on The CW’s award-winning phenomenon Jane the Virgin.