Dr. Joseph MacInnis is a medical doctor who spent ten years studying the physiology and psychology of men and women working in the depths of the sea. Between 1964 and 1994, he led thirty expeditions and logged more than five thousand hours under the Great Lakes and Atlantic, Pacific and Arctic oceans. Since 1994, Dr. MacInnis has been studying leadership in lethal environments and searching for new ways to improve the relationships between the human family and the natural world. His work has earned him numerous distinctions including six honorary degrees, the Admiral's Medal, and the Order of Canada. Please send me availability & fees for Joseph MacInnis
Thank you for your interest in this Harry Walker Agency speaker.
You will hear from one of our agents in the next 24 hours. If you have any other questions or information, please call us right away at 646.227.4900. Are you also interested in learning more about other speakers? Create a My Speaker List.
Rave Reviews About Joseph MacInnis
“
“Thank you for a formidable performance in the panel … You brought character, insight, experience and wisdom to the discussions … Everybody present enjoyed the session tremendously!”

Leadership When Your Life Depends On It

In times of turbulent change, the best option is deep leadership. In his 55-minute presentation, he uses dramatic video clips to take you on a perilous journey two miles under the ocean and 200 miles in space-telling unforgettable stories about unique individuals who embody the spirit of ‘de ...

In times of turbulent change, the best option is deep leadership.

In his 55-minute presentation, he uses dramatic video clips to take you on a perilous journey two miles under the ocean and 200 miles in space-telling unforgettable stories about unique individuals who embody the spirit of ‘deep leadership.’

Insights for the Digital Workplace And a Planet in Peril ...

Insights for the Digital Workplace And a Planet in Peril 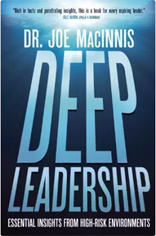 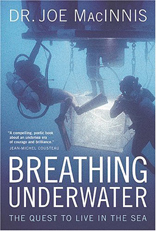 Breathing Underwater: The Quest to Live in the Sea

In 1962, Joseph MacInnis graduated in medicine from the University of Toronto. After his internship, he was awarded a Link Foundation Fellowship to study diving medicine at the University of Pennsylvania. In 1964, he became medical director of Edwin Link's Man-In Sea Project and a year later, medical director of Link's new company, Ocean Systems Inc. Between 1964 and 1970, as Ocean Systems expanded, Dr. MacInnis and his associates carried out some of the deepest and longest dives ever made, including a 48-hour saturation dive to 432 feet in the Bahamas, a 48-hour saturation dive to 636 feet in the Gulf of Mexico, and a 700-foot research sub lock-out dive in the Bahamas. in 1969, he was a medical consultant to the U. S. Navy's SEA LAB 3 program.

In 1970 he was asked by Prime Minister Pierre Trudeau to assist in the writing of Canada's flrst national ocean policy. That year, supported by the Canadian government, he initiated the first of ten research expeditions to study the systems and techniques needed to work safely under the ice of the Arctic Ocean. During the next ten years he led teams that made the first science dives under the North Pole and constructed Sub Igloo, the world's first undersea polar station under the Ice of the Northwest Passage.

From 1978 to 1983, Dr. MacInnis led the teams that discovered, explored, and filmed HMS Breadalbane, a three-masted British transport crushed by the ice in the Northwest Passage in 1853. Located in 340 feet of water five hundred miles north of the Arctic Circle, HMS Breadalbane is the world's northernmost known shipwreck.

In 1984 he turned his attention to the study of humans exploring the deep ocean. In 1985 he was an advisor to the Titanic discovery team and two years later made his first dive to the wreck. Between 1985 and 1991, In the Russian Mirs and French Nautile research subs, he made a 10,000-foot dive into Monterey Canyon, a 16,000-foot descent into the eastern Atlantic and two dives to the bow and stem sections of the Titanic. In 1991 , he co-led the $2-million dollar IMAX-Titanic expedition that made 17 dives to the wreck, conducted the first scientific studies and produced a film seen by two million people. It was this expedition that inspired James Cameron's epic movie.

In 1993, Dr. MacInnis was contracted by the International Joint Commission to study how new media techniques could enhance the conservation of the Great Lakes and St. Lawrence River. The next year, as part of this study, he led the team that made the first multiple dives in a research sub to a 19th century schooner in lake Erie and the wreck of the Edmund Fitzgerald in Lake Superior.

From 1996 to 2004, Dr. MacInnis chaired the TD Financial Group's Friends of the Environment Foundation—a partnership between the TD bank and its customers. The Foundation has contributed more than 40 million dollars to environmental projects across Canada.

He is actively involved in a number of community service projects including the Trudeau Foundation, Pearson College of the Pacific, World Wildlife Fund, and the Trudeau Center for Peace and Conflict Studies at the University of Toronto.

Dr. MacInnis is currently working with the Academy Award winning director James Cameron on a series of deep-sea documentaries. In 2003, he accompanied Cameron and his team on a two-month, $14-million Disney-IMAX expedition into the Atlantic and Pacific Oceans. Using two ships and four research subs, they made 40 dives at ten deep hydrothermal vent sites surrounded by bizarre communities of life. Cameron's 3-D film Aliens of the Deep and Dr. MacInnis' companion book were released In 2005.

In 2005, he joined Cameron and his team on a $7-million Discovery Channel expedition to explore the last unseen rooms inside Titanic and produce a 90-minute live broadcast from the wreck. The expedition featured the first-ever surface-to-seafloor communication system and four new extreme-depth video-cam robots. Twenty dives were made in the Russian Mir subs and the live broadcast aired on July 24th. Dr. MacInnis' book on the expedition was called Titanic Dreams.

Each year he makes motivational presentations on leadership and teamwork to Fortune 500 companies Including IBM, Microsoft, Toshiba, Fidelity and Ford. He also gives leadership workshops for EMBA programs.

Dr. Macinnis has written ten books and numerous articles for newspapers and magazines including Scientific American, National Geographic and Wired. His books include Underwater Man, Saving the Ocean, Fitzgerald's Storm, Titanic In a New Light, and Surviving Terrorism.

His two most recent books, Breathing Underwater and Aliens of the Deep were published by Penguin Canada and National Geographic Books.