Ms. Jeri Thompson has been National Policy Director and Spokesperson at American Seniors Association Holding Group, Inc. since November 2012. Ms. Thompson is a prominent national political strategist with extensive experience in public policy, lobbying and public relations. Her career includes assignments with the Republican National Committee, the Senate Republican Conference and in the private sector, with global public relations firm Burson Marsteller. She is also a frequent commentator on politics, current events and family issues for a number of news organizations including Fox News, the American Spectator and the Washington Examiner.

Please send me availability & fees for Jeri Thompson
Thank you for your interest in this Harry Walker Agency speaker.
You will hear from one of our agents in the next 24 hours. If you have any other questions or information, please call us right away at 646.227.4900. Are you also interested in learning more about other speakers? Create a My Speaker List.
Explore Talks By Jeri Thompson
Expand all >

How to Be Heard in Washington

How to Think about Influencing the Influencers

From Security Moms to Accountability Moms: How They are Impacting Politics Today

The Real Stories of Real Housewives of Washington, DC

Kitchen Table Politics: Analysis on the Political Trends from Around the Country 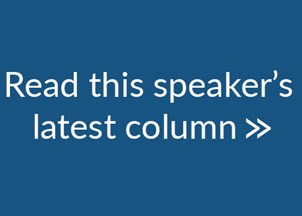 Jeri Thompson is a contributor for The American Spectator.

Jeri Thompson was born September 30, 1966, in the small town of Hastings, Nebraska. The family later moved to Naperville, IL, a suburb of Chicago.

Jeri graduated from DePauw University in 1988 with a degree in English Literature.  Her early professional career included stints as a mortgage banker in the Chicago area, as well as an ad executive in Nashville Tenn., for Speer Communications. In 1998, she joined the Republican National Committee, focusing on policy communications and directing media strategies during a time when the GOP was transforming the use of TV and radio communications, especially talk radio. Jeri later served as Director of Communications for the Senate Republican Conference.

In 2002, Fred and Jeri were married in her hometown of Naperville. In October 2003, with the birth of daughter Hayden, Jeri added the most rewarding role to her resume: mother. Three years later, son, Samuel Howard was born. Jeri also remains active in politics, providing strategic and fundraising advice and support to conservative candidates around the country. She also serves as a frequent commentator on politics, current events and family issues, for a number of organizations and media outlets, including Fox News, Pajamas Media, the American Spectator and the Washington Examiner.