Filled with wit, wisdom and real-life stories, Harvey Mackay's talks immediately enrich your audience's personal and business lives. In presentations tailored to the specific goals of each group, Mackay shares the secrets of how to develop more productive relationships; survive the ever-changing job market, and outsell, outnegotiate and outmotivate the competition.

Please send me availability & fees for Harvey Mackay
Thank you for your interest in this Harry Walker Agency speaker.
You will hear from one of our agents in the next 24 hours. If you have any other questions or information, please call us right away at 646.227.4900. Are you also interested in learning more about other speakers? Create a My Speaker List.
Rave Reviews About Harvey Mackay
“
A brilliant job-I was so very impressed by the care Harvey took to understand the audience and address his remarks specifically to our executives. 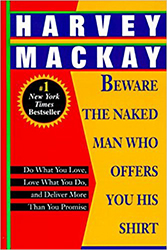 Beware the Naked Man Who Offers You His Shirt: Do What You Love, Love What You Do, and Deliver More Than You Promise 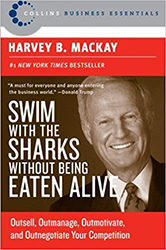 Swim with the Sharks Without Being Eaten Alive: Outsell, Outmanage, Outmotivate, and Outnegotiate Your Competition 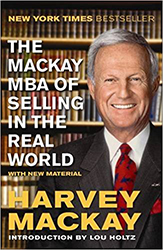 The Mackay MBA of Selling in the Real World

Harvey Mackay is the author of the New York Times #1 bestsellers Swim With The Sharks Without Being Eaten Alive and Beware the Naked Man Who Offers You His Shirt. Both books are among the top 15 inspirational business books of all time, according to the New York Times. In total, Harvey’s books have sold 10 million copies worldwide, been translated into 37 languages and sold in 80 countries.Harvey is a nationally syndicated columnist for United Feature Syndicate, whose weekly articles appear in 52 newspapers around the country, including the Chicago Sun Times, Rocky Mountain News, Orange County Register, Minneapolis Star Tribune and Arizona Republic. He also is one of America’s most popular and entertaining business speakers. Toastmasters International named him one of the top five speakers in the world.

At age 26, he purchased a small, failing envelope company in 1959 which has grown to a $100 million business employing over 600 people. MackayMitchell Envelope Company is one of the nation’s major envelope manufacturers, producing 25 million envelopes a day. As chairman, Harvey’s philosophy is engrained in the company, beginning with its motto: Do what you love, love what you do and deliver more than you promise.

Harvey is a graduate of the University of Minnesota and the Stanford University Graduate School of Business Executive Program. He is an avid runner and marathoner, and former #1 ranked tennis player in Minnesota.

He currently sits on the board of the Minnesota Orchestra and is a former director on Robert Redford’s Sundance Institute and the University of Minnesota Carlson School of Management. He has been a guest lecturer at various universities and business schools, including Harvard, Stanford, Michigan, Cornell, Wharton and Penn State.

Central to Harvey’s business, and to his books, is the ability to stay competitive in the often cut-throat world of business, to ‘swim with the sharks’, without sacrificing one’s personal integrity or doing it at the expense of other people. He does this by focusing on building strong relationships with both customers and employees.

In fact, Harvey is a master of networking. He believes most people make the mistake of only turning to their network when they need it; for example, when they’re looking for a new job. Harvey says that networking is a lifelong practice that provides you with new knowledge and experiences, job security, expanded financial reach, and the strength of the group. The secret to maintaining a great network is, above all, knowing the value of the personal touch.

In spite of his hectic schedule, Harvey still finds plenty of time for family and fun. He’s an avid golfer (11.4 handicap) and recently won the Super Senior Men’s Championship at his home club in Scottsdale.

He and his wife, Carol Ann, have been married over 45 years, and enjoy spending time with their nine grandchildren.