The recipient of every major journalism award, including the coveted Gold Baton and more than 30 Emmy awards, Bill Moyers brilliantly reveals the nuanced textures in the fabric of American life. 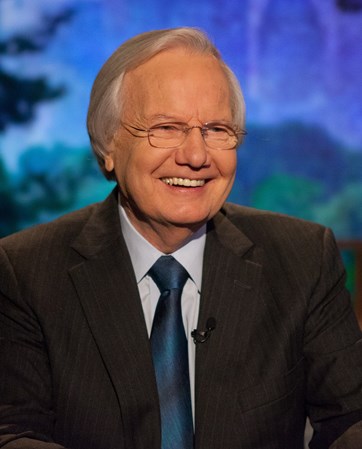 Please send me availability & fees for Bill Moyers
Thank you for your interest in this Harry Walker Agency speaker.
You will hear from one of our agents in the next 24 hours. If you have any other questions or information, please call us right away at 646.227.4900. Are you also interested in learning more about other speakers? Create a My Speaker List.
Rave Reviews About Bill Moyers
“
I was moved by your reflections of 9-11 with a focus on the actual people whose lives were lost. The individual stories you shared with us brought the horrific event to the human level where it belongs. As I walked to my car after your speech, I felt almost like a college student again, more focused on the issues of our society and on the small contributions each of us can make. I felt recommitted to my beliefs in providing community service, speaking out against any prejudice or intolerance, and never taking our democracy for granted. Thanks for the recharge.

Moyers on America: A Journalist and His Times

Raised amongst the story-telling traditions of the Midwest, Bill Moyers shares and relates his personal journey to a prominent career in broadcast journalism. ...

Raised amongst the story-telling traditions of the Midwest, Bill Moyers shares and relates his personal journey to a prominent career in broadcast journalism.

The Soul of Democracy

Bill Moyers encourages audiences never to take our democracy for granted, focusing on the most relevant issues of our society and showing how they fit into the perspective of our times. ...

Bill Moyers encourages audiences never to take our democracy for granted, focusing on the most relevant issues of our society and showing how they fit into the perspective of our times. Moyers on America: A Journalist and His Times Bill Moyers has been recognized as one of the unique voices of our times. His career in broadcast journalism has spanned over four decades and earned him more than 35 Emmy Awards, nine Peabody Awards, two Alfred I. DuPont Columbia University Awards, the National Humanities Medal from the National Endowment for the Humanities, the PEN USA Courageous Advocacy Award, the Lifetime Achievement Award from the National Academy of Television Arts and Sciences, and the Honorary Doctor of Fine Arts from the American Film Institute.

He and his wife and creative partner Judith Davidson Moyers have been responsible for such acclaimed series as Healing and the Mind, On Our Own Term –Moyers on Death and Dying, Becoming American: The Chinese Experience, Close to Home –Moyers on Addiction and Recovery, America’s First River – The Story of the Hudson, Joseph Campbell and the Power of Myth, World of Ideas, The Language of Life and the weekly television series NOW with Bill Moyers, Bill Moyers Journal and Moyers & Company.

Bill Moyers graduated from the University of Texas, studied at New College Divinity School at the University of Edinburgh in Scotland, and received his Master of Divinity from Southwestern Baptist Theological Seminary in Texas. His interest in politics and journalism took him to Washington, where he worked as a liaison between John F. Kennedy and Lyndon B. Johnson in 1960, became a founding organizer of the Peace Corps and its first deputy director, and Special Assistant then Press Secretary to President Lyndon B. Johnson. He left Washington early in 1967 to become publisher of the daily newspaper Newsday on Long Island and joined the Public Broadcasting Service in 1971. He also served as Senior Correspondent for the acclaimed CBS documentary series CBS Reports founded by Edward R. Murrow and for five years was senior news analyst of the CBS Evening News. He is president of the Schumann Media Center, a non- profit organization for the support of independent journalism.

Bill and Judith Moyers have been married 60 years and have three grown children and five grandchildren. They reside in New York City.