Barry Libert is a digital board member, strategic advisor and angel investor. He has spent the last decade: advising organizations about how to benefit from digital technologies to drive value, revenues and profits; assisting CEO’s pivot their organizations to more valuable business models; and founding and investing in social, mobile, cloud, and big data companies.

His portfolio companies collectively manage more than 15,000 customer and employee networks with more than 40 million users for 350 enterprises with more than 100 million fans. He has also worked with organizations such as Microsoft, GE Healthcare, Sun Life, The US Army, Goldman Sachs, Deloitte, and ESPN on how to use social, mobile and cloud technologies to engage their customers and employees in order to drive growth and innovation. Mr. Libert has delivered keynote speeches at company, industry and private events to audiences of 30,000+ globally.

Please send me availability & fees for Barry Libert
Thank you for your interest in this Harry Walker Agency speaker.
You will hear from one of our agents in the next 24 hours. If you have any other questions or information, please call us right away at 646.227.4900. Are you also interested in learning more about other speakers? Create a My Speaker List.
Explore Talks By Barry Libert
Expand all >

The Network Imperative: 10 rules for Success in the Digital Age

Where’s the Value? 5 Steps to Digital Success in the Network Age 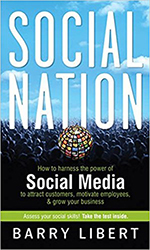 Social Nation: How to Harness the Power of Social Media to Attract Customers, Motivate Employees, and Grow Your Business

We Are Smarter Than Me: How to Unleash the Power of Crowds in Your Business 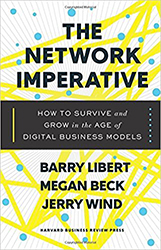 The Network Imperative: How to Survive and Grow in the Age of Digital Business Models

Barry is a digital board member, CEO advisor and angel investor. He is also a senior fellow at Wharton’s SEI Center.

Barry has spent the last decade: advising boards and leaders about how to build digital networks and platforms to drive value, growth and profits; assisting CEO’s pivot their business models; and investing in social, mobile, cloud, and big data startups.  His portfolio companies have built networks and platforms for many leading brands including Goldman Sachs, Major League Baseball, AAA, and ESPN. Barry also sits a number of for-profit and not-for-profit boards.

Barry has co-authored 6 books. His newest is called The Network Imperative: How to Survive and Grow in the Age of Digital Business Models (published by Harvard Business Review Press, June 28, 2016). This book, along with his others – including We Are Smarter than Me and Social Nation - focus on the value of today’s technologies, new business models and networks.

Mr. Libert has delivered more than 400 keynote speeches to 30,000 people globally. He has been published 1100 articles in such periodicals as Harvard Business Review, The Wall Street Journal, Newsweek, Barron's, and The New York Times. He has also appeared on CNN, CNBC, FNN and NPR.